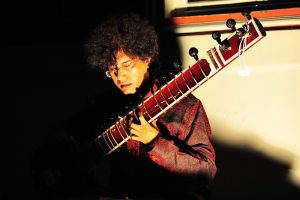 Debojyoti Gupta is considered & acclaimed as one of the finest, most sensitive, brilliant & dynamic sitar exponent from Imdaadkhani Gharana style of playing Sitar among his generation today. Debojyoti Gupta stands out for his exquisite melodic presentation, intricate & sophisticated sense of rhythm & his astonishing flawless instrumental technique & clarity of taans which is very unique & captures the mind of the listeners from very start to the end.

Blessed to be born in a family of music lovers & practitioners, Debojyoti was introduced to the world of music through Vocal music at the tender age of four, by his first Guru, his mother, Smti Leena Gupta & simultaneously he was initiated into Tabla, which gave him firm foundation in the Swara & Laya before being groomed into art of playing sitar.

Debojyoti Gupta received his initial training in Sitar from respected Pt. Ramakant Singh, who was a disciple of famous Ustad Ilyas Khan of Lucknow. He was extremely fortunate when in one of his concert in the year 1990, the renowned personality in our country & internationally famed Sarod maestro, Pt Buddhadev Dasgupta happened to be present & hearing him playing Sitar, Panditji was so impressed that he at once decided to make Debojyoti his disciple & for eight years he got talim from him.

Once again Debojyoti was very much fortunate to be noticed by India's one of the best ever & world famous Sitar maestro, Living Legend Ustad Shahid Parvez Khan of Etawah & Imdadkhani Gharana & Ustadji too noticed tremendous talent in Debojyoti & accepted him as his disciple in the year 2000 & since then Debojyoti is gaining Talim under ustadjis guidence.

A graded artist of AIR & winner of national competition of music by Air,Debojyoti also got national scholarship in Music from Govt of India three times. Debojyoti Gupta is not only a good performer, he is also considered a very very good teacher who has many students from all over the world who are playing very well in their respective countries.