Debojyoti started learning sitar in his childhood from Shri Ramakant Singh,Silchar. Shri Ramkant Singhji belonged to Lucknow Gharna & learned from One of the best Stalwart from Lucknow Gharana,Ustad Ilyas Khan. Shri Ramkant Singhji was also a ardent follower of Ustad Vilayet Khan. He taught Debojyoti with so much care & devotion that today Debojyoti gives all the credit to his musicianship & inspiratio to his 1st Guru Ramakantji only. Now a brief history of Lucknow Gharana. The Gharana also called the Lucknow -Shahjehanpur Gharana, is essentially a lineage of Sarod Players. But it has also produced distinguished Sitar players such as Ustad Ilyas Khan( 1924-1989), Ustad Waliullah Khan( 1890-1951) Yusuf Ali Khan (1877 -1962). 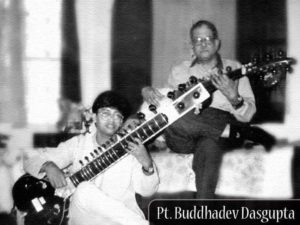 Pt Buddhadev Das Gupta took up his sarod training under the tutelage of Sarod Maestro, Pt. Radhika Mohan Maitra at the tender age of 10 and the Guru-Shishya relationship which was established lasted till Pt. Maitra's passing away on 15 th October. 1981.

Buddhadev's Gharana ( Musical Lineage) has been accepted as the foremost living representative of Ustad Murad Ali Khan. His music today is a synthesis of this Gharana interwined with the nuances of Rampur Seniya Gharana perfected by his Guru, Pt. Radhika Mohan Maitra.

Buddhadev's style, though firmly anchored in tradition, is unique in that it combines a cerebral approach to music with a keen aesthetic sense and a rare accuracy of notes. His imagination always stays linked to the time-honoured spirits of the melody and never deviates to the point of being an aimless collection of purple patches catering to the lighter tastes of the gallery. Like his illustrious Guru, he is a seeker of wonders and surprises within the boundaries of tradition. Having struck a perfect balance between gayaki and tantrakari, Buddhadev, through his thorough raga conception, pin pointed note accuracy, rabab based bol patterns and fluent ekhara taans, of which he is the pioneer, have added a new dimension to his parent style of playing the sarod.

He is a unique musical personality standing out in the vast crowd of Indian musicians for his distinctive way of musical thinking, and a style which is instantly recognisable as totally his own. 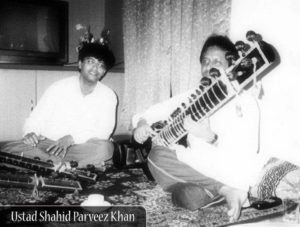 Ustad Shahid Parvez Khan is privileged with both belonging to an illustrious musical family, and for achieving success in not only preserving the tradition but in pushing its boundaries to even greater heights of aesthetic beauty. He is one of the most brilliant musical gems of the famous Etawah Gharana and belongs to the seventh generation of this musical lineage. His family has produced the most revered and influential figures in Hindusthani Classical Music including the likes of Sahabdad Khansahab, Imdad Khansahab, Enayet Khansahab, Waheed Khansahab and Vilayat Khansahab.
A very young Shahid Parvez was initiated into the rich music of the Gharana by his illustrious father and Guru Ustad Aziz Khan, a famous musician and a noted composer and the son of the legendary Sitar and Surbahar virtuoso Ustad Waheed Khansahab. As is the custom, Ustad Aziz Khan first initiated his son into vocal music and tabla, before training him on the Sitar over many years with all the intensity and rigor that had made this Gharana famous. The young Shahid Parvez was recognized as a child prodigy and had started performing in public by the time he was only eight years of age. Dogged perseverance and hard work over the years have been rewarded with an extra-ordinary technical prowess and a mastery over ‘Layakari’. One of the numerous achievements of Ustad Shahid Parvez Khan is to have mastered both Vocal Music and the ‘Tantrakari Baaj’ and then fuse them in such a way as to bring this complex amalgam within the easy reach of all.
Few instrumentalists have enjoyed so much of love and admiration as Ustad Shahid Parvez Khan has, from the music loving fraternity worldwide. He is a Top Grade artist of A.I.R. and a recipient of numerous national and international awards including the ‘Sur Shringaar’, the ‘Kumar Gandharva Samman’, the“M.L. Koser Award’, etc. He is also a recipient of the prestigious “Sangeet Natak Academy Award” of 2006. He has performed in all major musical festivals in India and abroad including the Festival of India held in the US, Europe, USSR, Canada, Middle East, Africa and Australia, enthralling the audience everywhere. With numerous LP records, audio and video cassettes, CDs and DVDs, numerous awards and accolades, and a distinguished performance career in India and around the world, he is widely recognized as one of the greatest sitar-players of the world.
For Ustad Shahid Parvez Khan, the Sitar and Self are identical entities, and music is not just a discipline but life itself – vibrating and pulsating and full of colour. The power of his music is most immediately encountered in the highly charged sound quality he conjures from his Sitar and the sparkling intelligence that is the hallmark of his improvisatory music. By sheer precision and an astute artistic sense he has made for himself a place in the limitless, infinite universe of Indian Classical Music. As the Rajasthan Patrika once said –”After listening to Ustad Shahid Parvez, the future of Sitar is still bright after Pandit Ravi Shankarji.”