I graduated in Instrumental Music (Sitar) in early 70’s. 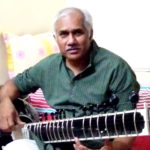 After a long gape of 20 years I again took up Sitar & started learning in late 90s. It went for two to three years as I was unable to devote time to Music due to Job constraints despite of my keenness in learning music. After Six years of my retirement from Govt. Job one day on Face book I came across a Video uploaded by Debojyoti ji on a mutual friend’s Timeline. It was pleasant surprise to view & listen that Video wherein a young artist was playing Raag Charukeshi with full devotion. Immediately I commented over the way he was playing. It was mesmerizing to listen as if Sitar is singing. I have heard and experienced singing Violin but never experienced Singing Sitar. I had heard about Gayaki ang in Sitar playing but never came across ,may be due to the fact that I was not aware of the fact as how the Gayaki anga is performed. Again after receiving another clipping, I sent friend’s request which was accepted by Debojyoti ji. One day after a long chat I, hesitatingly, apprised him of my piecemeal Sitar playing journey and keenness to start learning Sitar afresh from him at the age of 66 years, which he immediately accepted. (Perhaps there is no age bar for learning if you intend to do so)
It was totally a new & great experience on the very first day itself. One, learning ONLINE & secondly, with a new sensitive & brilliant GURU. After the class I was thinking that whatever I have learned so far was good for nothing. A performer may not be a good teacher & a good teacher may not be a good performer. In Debojyoti Ji (The GURU) I found both the qualities .He has got every talent that should be in good performer & a Teacher as well. He is fully devoted to Sitar as he says “Music is my soul and Sitar is my soul mate. “.This is totally correct as I have experienced in his performances. His Soul speaks through his instrument. His Sitar is catharsis of his emotions. It WEEPS when he is in SORROW and DANCES when he is happy. With the blessings of Great Maestros viz.Legendry Sarod player Shri Budh Dev Dass Gupta & Ustad Shahid Parvez, he has developed his own style / technique of teaching and performance too which impresses every one. While teaching, Debojyoti Ji (The Guru) develops a personal repo with his students. He understands the psychology of his students and acts accordingly. It is a great quality that he posses which is lacking in so many present Gurus. Though very late but I am happy that I have found a very good teacher (The GURU) in Debojyoti ji. I wish him all the success in this age of tough competition where an Artist finds difficult to establish himself. 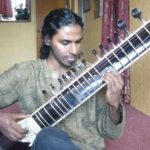 Never have I had such wonderful experiance everytime I learn from my Guruji.
A wonderful human,with such kindness & dedication to his students.A man whom
has the highest respect for music & sitar.My guruji loves his students.
He is not afaird to share his knowledge to anyone.Every class for me is a
new experiance filled with joy & amusement listening to how beautiful his
playing is.He is not only my guru in sitar but also in life,he explains
everything in detail.I believe that you can know a person by the type & way
they play the music.& my guruji is definitely the sweetest,loving & beautiful
sitarist for me.May i be blessed always to have u as a guruji.